The High Mountains of Portugal by Yann Martel 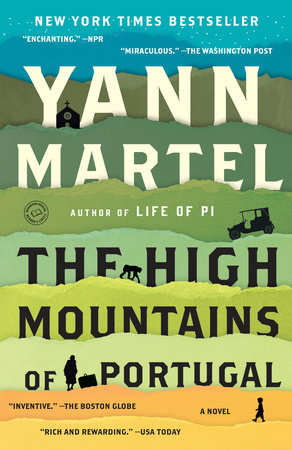 The High Mountains of Portugal is a suspenseful, mesmerizing story of a great quest for meaning, told in three intersecting narratives touching the lives of three different people and their families, and taking us on an extraordinary journey through the last century. We begin in the early 1900s, when Tomás discovers an ancient journal and sets out from Lisbon in one of the very first motor cars in Portugal in search of the strange treasure the journal describes. Thirty-five years later, a pathologist devoted to the novels of Agatha Christie, whose wife has possibly been murdered, finds himself drawn into the consequences of Tomás's quest. Fifty years later, Senator Peter Tovy of Ottawa, grieving the death of his own beloved wife, rescues a chimpanzee from an Oklahoma research facility and takes it to live with him in his ancestral village in northern Portugal, where the strands of all three stories miraculously mesh together.
Beautiful, witty and engaging, Yann Martel's new novel offers us the same tender exploration of the impact and significance of great love and great loss, belief and unbelief, that has marked all his brilliant, unexpected novels. Yann Martel was born in Spain in 1963 of Canadian parents. After studying philosophy at university, he worked at odd jobs and travelled before turning to writing. He is the author of the internationally acclaimed 2002 Man Booker Prize-winning novel Life of Pi, as well as the novel Self, the stories The Facts Behind the Helsinki Roccamatios, and the collection of letters to the Prime Minister of Canada What is Stephen Harper Reading? Yann Martel lives in Saskatoon,Saskatchewan.

Many thanks to Lynn for her well researched and meaningful introduction to this novel.  Many of us had struggled to find connections between the three parts of the novel and between their characters.  Deciphering  Martel’s symbolism proved difficult.
Lynn provided a framework for us to consider his work.  Martel is a meticulous researcher who provides the reader with an accurate picture of Portuguese village life and culture, however, “the high mountains” are the high mountains in our lives – there are no high mountains in Portugal.
Faith is central to Martel’s writing and the three parts represent three approaches to faith.  The first is atheism - there is no god for Tomàs once he loses his partner, Dora, and their child to diphtheria. His quest is to find the crucifix carved by the priest who lost his faith in Africa which will show the world that “We are risen apes, not fallen angels”.
The second part deals with agnosticism and it is here that the element of magical realism is introduced. It is a “…chiefly Latin-American narrative strategy that is characterized by the matter-of-fact inclusion of fantastic or mythical elements into seemingly realistic fiction.” britannica.com Again, an ape appears as a key element in the story.
Finally, there is the concept of theism, where in part three, Peter learns to accept and love Odo and is able to live simply in the present.
All this provided rich fuel for discussion.  The novel is filled with death and loss.  The struggle to cope with grief and the anger and rebellion that stem from it are embedded in the book.  In grief, two characters from different parts of the book begin walking backwards – a FR member wondered if that was “walking by faith”. Does anything of value come from suffering?
Few of us had patience with the long complicated car journey of part one.  We appreciate the car as a novelty in society and we understand its disintegration, but in the end the car segment was too much for most of us. On the whole we thought there was too much symbolism and we felt it obscured rather than enhanced the meaning of the book.
We could not rationalize Tomás behaviour when the child was killed in the accident.  It seemed like if he wasn’t observed, then it didn’t count. He left the body of the child on the road, even though the child was the same age as his own dead son who he deeply mourned.
The pathologist held our attention although the diatribes of his wife tried our collective patience, and we  could not  decipher the significance of Agatha Christie’s works.  We did respond to the widow’s request to “tell me how he lived” rather than how he had died.
Part three carries the lightness of faith – Peter learns to live (and die) within god’s grace.
Thanks to Lynn’s dedicated work,  after a serious discussion, we all understood the book better.  I’m not sure we liked it.
Posted by Fireside Readers at 15:16