The Anglo Files: a field guide to the British by Sarah Lyall

Sarah Lyall moved to London in the mid-1990s and soon became known for amusing and sharp dispatches on her adopted country. Confronted by the eccentricities of these island people (the English husband who never turned on the lights, the legislators who behaved like drunken frat boys, the hedgehog lovers), she set about trying to figure out the British. Part anthropological field study and part memoir, The Anglo Files has already received great acclaim and recognition for the astuteness, humor, and sensitivity with which the author wields her pen. 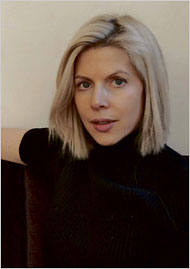 Raised in New York City, Lyall is a graduate of Philips Exeter
Academy, class of 1981 and of Yale University. Lyall married the author, Robert McCrum in 1995.
After 18 years as London correspondent for The New York Times Lyall returned to New York with the couple's daughters in 2013; they have returned to a transatlantic relationship for the time being.

The U.S. may have a special relationship with Britain, but there's a lot that divides Americans and Brits. Sarah Lyall, author of The Anglo Files: A Field Guide to the British, talks with Linda Wertheimer. The book details British people and their character. In one section of the book, Lyall explores Brits and booze.