Saul Indian Horse has hit bottom. His last binge almost killed him, and now he’s a reluctant resident in a treatment centre for alcoholics, surrounded by people he’s sure will never understand him. But Saul wants peace, and he grudgingly comes to see that he’ll find it only through telling his story. With him, readers embark on a journey back through the life he’s led as a northern Ojibway, with all its joys and sorrows.

With compassion and insight, author Richard Wagamese traces through his fictional characters the decline of a culture and a cultural way. For Saul, taken forcibly from the land and his family when he’s sent to residential school, salvation comes for a while through his incredible gifts as a hockey player. But in the harsh realities of 1960s Canada, he battles obdurate racism and the spirit-destroying effects of cultural alienation and displacement.

Indian Horse unfolds against the bleak loveliness of northern Ontario, all rock, marsh, bog and cedar. Wagamese writes with a spare beauty, penetrating the heart of a remarkable Ojibway man. Drawing on his great-grandfather’s mystical gift of vision, Saul Indian Horse comes to recognize the influence of everyday magic on his own life. In this wise and moving novel, Richard Wagamese shares that gift of magic with readers as well. 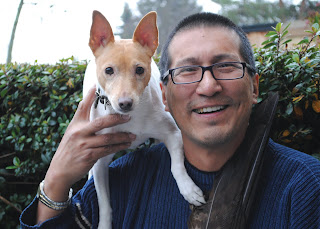 Richard Wagamese is a 51 year-old Ojibway from the Wabasseemoong First Nation in northwestern Ontario. Following a distinguished journalism career in which he became the first Native Canadian to win a National Newspaper Award for Column Writing, he moved into the realm of fiction writing.
The result was the award-winning bestseller Keeper’n Me in 1994, published by Doubleday Canada Ltd. This was followed by an anthology of his newspaper columns, The Terrible Summer in 1996 from Warwick Press and his second novel, A Quality of Light, in 1997 from Doubleday. A memoir entitled For Joshua: an Ojibway Father Teaches His Son arrived in October 2002. His third novel, Dream Wheels, was published by Doubleday in 2006 to be followed by a fourth, Ragged Company, in 2007.