A Tree Grows in Brooklyn 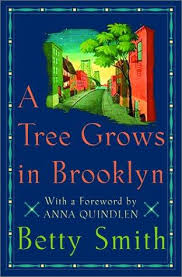 Through it is often categorized as a coming-of-age novel, A Tree Grows in Brooklyn is much more than that. Its richly-plotted narrative of three generations in a poor but proud American family offers a detailed and unsentimental portrait of urban life at the beginning of the century. The story begins in 1912, in the Williamsburg section of Brooklyn, where eleven-year-old Francie Nolan and her younger brother, Neeley, are spending a blissful Saturday collecting rags, paper, metal, rubber, and other scrap to sell to the junk man for a few pennies. Half of any money they get goes into the tin can bank that is nailed to the floor in the back corner of a closet in their tenement flat. This bank, a shared resource among everyone in the family, is returned to time and again throughout the novel, and becomes a recurring symbol of the Nolan's self-reliance, struggles, and dreams.
Those dreams sustain every member of the extended Nolan family, not just the children. Their mother Katie scrubs floors and works as a janitor to provide the family with free lodging. She is the primary breadwinner because her husband Johnny, a singing waiter, is often drunk and out of work. Yet there is no dissension in the Nolan household. Katie married a charming dreamer and she accepts her fate, but she vows that things will be better for her children. Her dream is that they will go to college and that Neeley will become a doctor. Intelligent and bookish, Francie seems destined to fulfill this ambition - Neeley less so.
In spite of (or perhaps because of) her own pragmatic nature, Francie feels a stronger affinity with her ne'er-do-well father than with her self-sacrificing mother. In her young eyes, Johnny can make wishes come true, as when he finagles her a place in a better public school outside their neighborhood. When Johnny dies an alcohol-related death, leaving behind the two school-aged children and another on the way, Francie cannot quite believe that life can carry on as before. Somehow it does, although the family's small enough dreams need to be further curtailed. Through Katie's determination, Francie and Neeley are able to graduate from the eighth grade, but thoughts of high school give way to the reality of going to work. Their jobs, which take them for the first time across the bridge into Manhattan, introduce them to a broader view of life, beyond the parochial boundaries of Williamsburg. Here Francie feels the pain of her first love affair. And with determination equal to her mother's, she finds a way to complete her education. As she heads off to college at the end of the book, Francie leaves behind the old neighborhood, but carries away in her heart the beloved Brooklyn of her childhood. 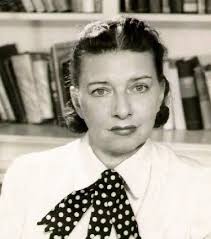 Betty Smith was born in Brooklyn and went to college in Michigan. Enrolled as a part-time student at the University of Michigan, she studied writing, particularly playwriting, almost exclusively. In 1930 she published two short plays in a volume written by drama students at Michigan, and in 1931 she won the first prize of one thousand dollars in the Avery Hopwood competition, mainly for her work in fiction. Even then she was developing the material she used later in her novels; one of her winning stories was called “Death of a Singing Waiter.”
She continued her studies at the Yale School of Drama and was awarded play writing fellowships by the Rockefeller Foundation and the Dramatists’ Guild. Although she published or produced more than seventy one-act plays, it was not until the publication of A Tree Grows in Brooklyn that she received widespread public recognition. The novel was praised mainly for its lyrical treatment of naturalistic subject matter and for its realistic dialogue. She collaborated with George Abbott to write a musical version for the stage

Posted by Fireside Readers at 11:01